What is RED Friday? And Why We Support It!

RED is an acronym that stands for Remember Everyone Deployed. R.E.D. Friday was created to remind people of our heroes overseas and show that we are thinking of them. People across the country wear red every Friday to serve as a reminder and spread the message of how important it is that we keep our troops in our thoughts, and prayers! 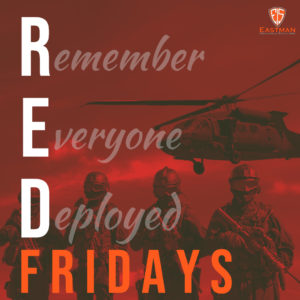 Where did RED Friday Originate?

This is somewhat of a hard question to answer as the information is varying as to who really started the cause, according to SoldiersAngels.org  it started as everyones favorite past time, email chains…..

You will soon see a lot of people wearing RED on Fridays. Here’s why…..

The Americans who support our troops, are the silent majority. We are not “organized” to reflect who we are, or to reflect what our opinions are. Many Americans, like yourself, would like to start a grassroots movement using the membership of the Special Operations Association, and Special Forces Associations, and all their friends, simply to recognize that Americans support our troops. We need to inform the local VFW’s and American Legion, our local press, local TV, and continue carrying the message to the national levels as we start to get this going. Our idea of showing our solidarity and support for our troops is starting Friday, and continuing on each and every Friday, until this is over, that every RED – blooded American who supports our young men and women, WEAR SOMETHING RED.

Word of mouth, press, TV — let’s see if we can make the United States, on any given Friday, a sea of RED much like a home football game at a university.

If every one of our memberships share this with other acquaintances, fellow workers, friends, and neighbors, I guarantee that it will not be long before the USA will be covered in RED – and make our troops know there are many people thinking of their well-being. You will feel better all day Friday when you wear RED!

Let’s get the word out and lead by example; wear RED on Fridays.

Please forward this to everyone you know!!

Wear RED on Fridays . SUPPORT OUR TROOPS! WE LIVE IN THE LAND OF THE FREE, BECAUSE OF THE BRAVE. FOR US, THEIR BLOOD RUNS RED!! GOD BLESS AMERICA.

RED Fridays are also a thing in Canada, Eh?

According to Military.com the movement also started picking up traction in 2006,

In March, 2006, another more-tangible movement began in Canada that implored subscribers to wear red to support the troops who are deployed. Now, there’s no telling if this movement got its start from the previously-mentioned email chain, but they do credit it as being an “American initiative.”

Military spouses Lisa Miller and Karen Boier organized an event and rallied many of their fellow Canadians to show up wearing red. While the “RED” is the color that fits the acronym, it also happens to work perfectly with the Canadian flag.

These events gathered steam and grew continuously until, eventually, its reach extended all the way up to the Canadian Prime Minister, Stephen Harper. On Sept 23rd, 2006, Harper led a rally of thousands in a show of solidarity for the Canadian soldiers deployed to Afghanistan as part of the Global War on Terrorism.

What it means to me….

Whatever the origins, I was introduced to the RED Friday movement by my good friend and mentor, Chris Paradiso, of Paradiso Insurance in Stafford Springs CT. Chris and I share many of the same passions, but two very close to our hearts are the love of Country, and honoring of our nations military and the men and women that serve in it. From the moment I saw a post from his agencies social media channels I knew instantly that this was something that not only I was going to get behind, but my company as well.

Our service men and woman are a different breed, ones that understand service above self, they sign their name on a dotted line and pledge an oath to defend our nation from all terrorist, foreign and domestic, even if that means paying the ultimate price, their lives.  If that is not something that you can get behind, I dont know what is!

Our honorary son, graduating at the MCRD, San Diego

We hope this helps you gain a little insight into RED Friday and it is my sincere desire that more people will see the importance this simple gesture and jump on the team. RED Fridays, Support Those That Support YOU!

Previous Post: What is California High Value Homeowners Insurance & How Do I Know If I Need It?

Next Post: 7 Cars In 2020 That Are Increasing In Value

This website uses cookies to improve your experience while you navigate through the website. Out of these cookies, the cookies that are categorized as necessary are stored on your browser as they are essential for the working of basic functionalities of the website. We also use third-party cookies that help us analyze and understand how you use this website. These cookies will be stored in your browser only with your consent. You also have the option to opt-out of these cookies. But opting out of some of these cookies may have an effect on your browsing experience.
Necessary Always Enabled
Necessary cookies are absolutely essential for the website to function properly. This category only includes cookies that ensures basic functionalities and security features of the website. These cookies do not store any personal information.
Non-necessary
Any cookies that may not be particularly necessary for the website to function and is used specifically to collect user personal data via analytics, ads, other embedded contents are termed as non-necessary cookies. It is mandatory to procure user consent prior to running these cookies on your website.
SAVE & ACCEPT
ALREADY INSURED? COMPARE YOUR RATES WITH OUR PROVIDERS: COMPARE MY INSURANCE
Skip to content